A list of the desktop video games made by the Homestuck fandom, categorized by genre, with screenshots and download links. Contact us if you notice a game missing!

Homestrife is a Smash Bros-style platform fighting game that sticks true to the source material. There are only 3 playable characters, of varying levels of progress, and 3 stages. Development has been put on hold after a failed funding request to What Pumpkin. 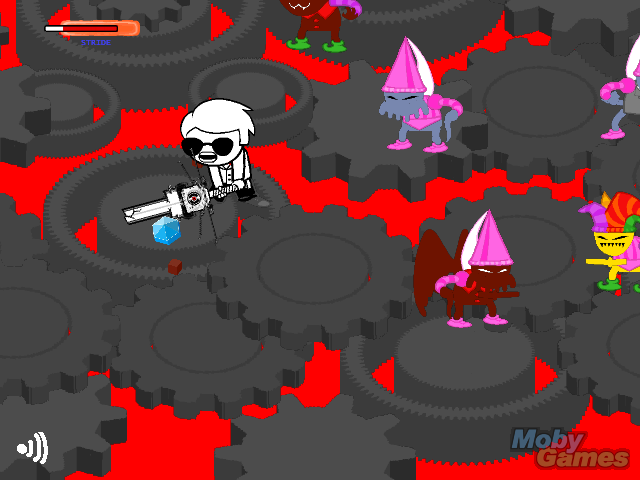 A fan-made, playable companion piece to [S] Dave: Accelerate. A Map with a bunch of Imps and Ogres you can kick around. TimeTables are implemented allowing you to jump backwards in time

Hammerkind is a 2D game where you play as John fighting imps as Rose builds his house. Featuring many easter eggs, a two-player mode, blue slimers and pogo hammers. We haven't been able to get past the fifth gate, this game seriously gets hard.

Run around on Dave’s lethal lava land and kill stuff with your ninja sword. Dave has a “Slash” and a “Swipe”, mapped to left and right click respectively, which can combo and increase your Style Gauge.

Also known as The Legend of/Binding of Karezi. A procedurally generated dungeon crawler based on the original Legend of Zelda and The Binding of Isaac. There are two versions available for this game: the demo, a black and white crawler more reminiscent of Zelda, and the final version, which is in color and more Homestuck themed.

Caseyquest is a short 3-level platformer meant as a silly filler for the three year Prospit kids' gap. You can explore LOWAS and fight imps, as well as meet many Homestuck characters. Featuring visual novel style scenes, wind powers and parcel pyxis.

A short survival horror/platformer component of Alabaster: The Doomed Session. Ginneo Adarna is stuck in a gigantic hive. Searching for a game his best friend sent him using his domestic griffin, Ginneo will lose himself in his own memories and past sins.

Also known as The Sburb Project, this is a pretty simple and straightforward bullet hell combining the gameplay of Touhou with the themes of Homestuck.

Another Homestuck bullet hell, this one only barely got off the ground and never got to the release stage (this is the first time the files have been released!), though it's got original art assets. You can only manually select characters and fight Jade Harley.

You are ERIDAN AMPORA. You have entered the LAND OF WRATH AND ANGELS and you sure as hell aren't out of either. A fast paced arcade shooter. shoot at the angels with your Ahab's Crosshairs to get points. Unfortunately, your work will never truly be done.

A very, very basic on-rails JRPG where you fight all the Homestuck characters with commands from the original Strife pages. Originally a school project, and it shows.

A simple twin stick shooter taking place on the Beat Mesa during the Scratch. Play as John and beat enemies up.

A DOOM style shooter based on the Humanimals blockbuster franchise by Andrew Fauntleroy Hussie. Download also includes a game based on Caper Havers, another Hussiework. Runs terribly on modern computers, runs terribly on old computers.

Felt Mansion is a 2D-fangame based on the Homestuck universe, a critically acclaimed Adventure RPG mainly focused on boss fights and exploration. Be the 4 Beta Kids, then complete a mission in this huge maze that is the mansion of the Felt, and save the young Handmaid from the clutches of the fearsome Doc Scratch. Winner of the 2019 /r/homestuck awards for Best Fanproject.

Alternian Turnabout is a standalone Ace Attorney style game that comes in three acts, two of which are courtroom arcs with an investigation phase in between. Defend your client Tavros from prosecutor Vriska Serket!

A text adventure set during an original SBURB session. A segment near the end of the adventure, with 1-2 hours of playtime, exploration, alchemy, kids and fun. Hellishly hard, like classic text adventures. This file recommended for example commands. Archived thread here. Specific actions tend to be "BE Y" and "CONTACT X", though there are plenty of secret commands. No relation to the Match-3 game.

Fanmade epilogue game taking place in Earth C. There is no real objective, you just walk around and explore the world you have created, examine things and talk to characters.

An experimental RPG Maker game based on the Touhoustuck trend. Heavily inspired by the [S] YOU THERE. BOY flash of Homestuck. Uses text adventure style gameplay (find item, use it on X), with some interactive exceptions. A single Act was made for this game.

An adventure game based on the fanventure Homestesque. 2-3 hours of content, with an original soundtrack and spritework.

A tribute to Homestuck that eventually inspired its own fanventure. Plays like [S] ACT 4, stars PETER SALT as he explores SBURB post-entry.

A short comedic game set in a Homestuck/Steven Universe crossover, based on a 4chan Homestuck AU (meaning many NSFW references, do not play this if you're underage). You play as JOEY CLAIRE, use items and fuse with different characters in order to beat the game.

Requires PyWright to play. Much like the other Ace Attorney based game, but with only a single Courtroom section available. You play as Terezi and defend Tavros with Gamzee as judge. Thread here.

A playable version of Homestuck ACT 1, edited to play like a point and click game. More a 5 minute curiosity than anything else.

Another curiosity, a proof of concept walkaround around John's room.

A Match-3 RPG based on Homestuck. 68 characters, over 100 enemies, and hours and hours of strategy. One of the best Homestuck games ever made, it took over the fandom when it first came out.

Bellum Deorum is a two-person turn-based strategy game. You direct an army of Homestuck characters on a two-dimensional board. Pretty basic student project.

Start on a quest to help the kingdom renew its rich conversations by correcting your fellow tangle-mates. Ironically riddled with grammatical errors, and fairly short and buggy.

A 3D online multiplayer SBURB simulator in active (though slow) development. Currently runs through entering your Land and fighting enemies there, with a recent Quests update that allows you to go into dungeons and get treasure.

An interesting proof of concept (not really a game) to showcase how unfair SBURB is. No input is required from the player, a SBURB session will be simulated on its own and lead to a victory or a defeat. You will need to run the game MANY times to get a win here.

A 2D SBURB simulator with online multiplayer, platforming and character generation. Permanently abandoned, but worth checking out if only to create a custom character.

As a cousin to the Prince from Katamari Damacy, you will meet total strangers with whom you have nothing in common, but before the school year is over you'll break rules, bare your soul, and touch each other in ways you never dreamed. Officially abandonware, Hussie worked on this and there are three Homestuck characters.

A 10 minute visual novel where you help Dave find his stolen nachos.

SugoiStuck is a Dating Simulation game in which you date a bunch of stupid homestuck-related characters while being flooded with memes. The game is not about Homestuck, but rather it is about /r/homestuck. The majority of the game is dedicated to the community of the subreddit in one way or another.

A collection of romance VNs that aren't big enough to justify multiple slots. Many of them are NSFW, browse at your discretion. Also to make proper listings we'd have to play all of them and uh... please don't make us.

Contact us if you've found a download of any of these games. Many of these are small visual novels but that's no excuse not to archive them.